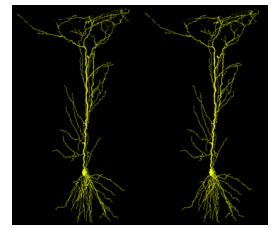 Alzheimer’s disease affects over 46 million people worldwide, estimated to triple by the year 2050. It has a long preclinical stage and, before any clinical symptoms appear, pathological processes are observed in the hippocampus and entorhinal cortex, key brain structures responsible for memory encoding and retrieval. AD cannot be prevented, halted or cured today, and new interdisciplinary ways are urgently needed for the understanding and treatment of this devastating disease. Recent experimental evidence supports the fundamental role of Alzheimer’s disease-related peptides early in the pathology: in particular the most widely studied Amyloid beta (Aβ), and the less investigated Amyloid eta (Aη) and Amyloid precursor protein (APP) C-terminal peptide (AICD).

The project extends beyond the state-of-the-art by integrating ex-vivo experimental data into multi-scale in silico approaches to suggest potential targets for more effective treatments in the initial phase of Alzheimer’s disease. By including the models into the Brain Simulation Platform of the Human Brain Project, the project will provide to the community an essential multi-scale modelling tool for this devastating disease.

Dr Hélène Marie’s team is interested in understanding how physiological and pathological conditions shape neuronal plasticity. We have an integrated approach to delineate how molecular changes translate into behavioural outcomes. We have strong expertise in in vitro electrophysiology on brain slices (field and patch clamp recordings) and in behaviour. We use viral approaches for in vivo protein expression as well as transgenic lines to alter brain molecular mechanisms. We are also currently developing ...

Over the past 30 years the Computational Neuroscience Laboratory of CNR-IBF, headed by Prof. Michele Migliore, has been involved in the development and implementation of computational models of complex systems.

The broad long-term goal is to investigate, using realistic models and state of the art simulations techniques, the basic processes underlying the nervous system functions and dysfunctions. In close interdisciplinary collaboration with leading experimental laboratories, we investigate neuronal networks and single neurons at ...

This is the FLAG-ERA, the Flagship ERA-NET Joint Transnational Call JTC 2019 in synergy with the Human Brain Project.